Cathcart - A Den of Thieves

|In Official Lore
|By Alysianah

Welcome to another episode of Casual Citizen. An ongoing series about the upcoming first-person MMO Star Citizen by Cloud Imperium Games.  I’m your host Alysianah from the Mystic Worlds Gaming Blog.  This week’s episode takes us back to the outer reaches of the Star Citizen universe, to explore another Star System. It’s Cathcart, one of the systems in my top 10 must-see list.  Please sit back, relax and enjoy.

Welcome to another episode of Casual Citizen. An ongoing series about the upcoming first-person MMO Star Citizen by Cloud Imperium Games. I’m your host Alysianah from the Mystic Worlds Gaming Blog. This week’s episode takes us back to the outer reaches of the Star Citizen universe, to explore another Star System. It’s Cathcart, one of the systems in my top 10 must-see list. Please sit back, relax and enjoy. 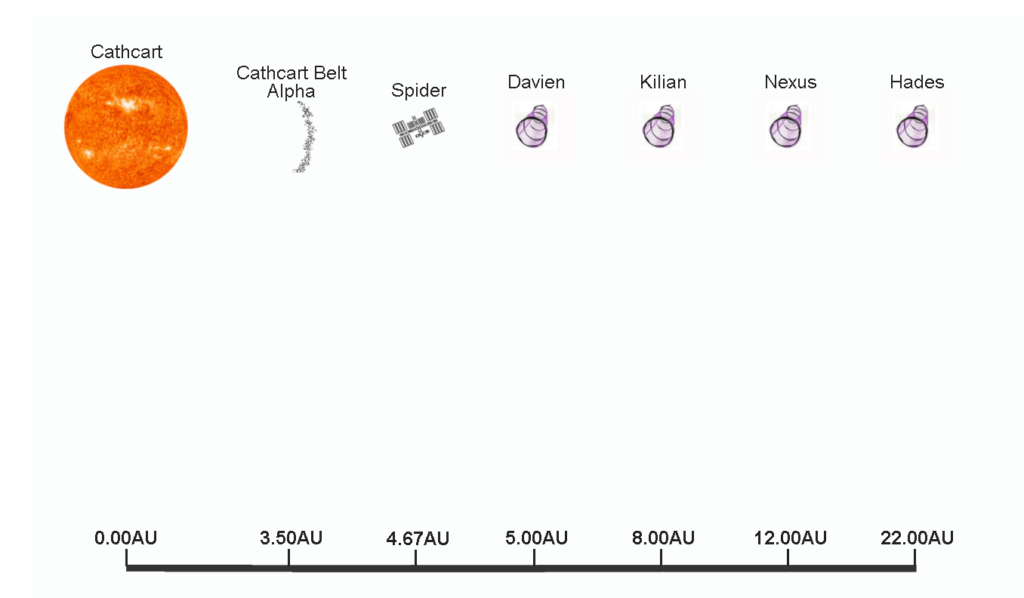 Directly from CIG, as printed in an Observist article on RobertsSpaceIndustries.com

Greetings, traveler, there are millions of sights to see in the universe. While the team at THE OBSERVIST is here to make sure you get the best traveling experience possible, the true traveler goes beyond the safe and secure, into the wild and unpredictable edges of the universe. This is OBSERVIST DARK, chronicling the systems where safety is not guaranteed.

Today, we’re taking you to the ultimate den of thieves. The capital of crime. The nexus of the nefarious. That’s right, traveler, we’re heading to the Cathcart system.

Astronomically speaking, Cathcart is fundamentally void: a star without true planets. It’s a loose chain of asteroids and mini-worlds orbiting far from a green band. With this structure, there was no compelling reason for the system to be developed, let alone inhibited.

Cathcart, was initially charted about five hundred years ago, listed as a Class C military zone and abandoned. When attention returned to the system it was for security purposes. The Navy initiated a plan to build a snooping post in Cathcart. However, improvements in scanning technology increased rapidly shortly after, negating the need for a large orbital spy post. Work on the Navy’s partially built platform was terminated, leaving Cathcart to the void.

Sometime later Cathcart’s usefulness was revisited. It was identified as a location where military spacecraft and a limited amount of supplies could be stored. With no planets or local populace to manage, it could be used as a staging area. Making it easy to re-crew the ships and deploy them in the event of a crisis. Decision made, pre­fab processing industrial units were towed in the system. For decades, the system amassed all types of military spacecraft – cruisers, destroyers, carriers, and frigates. All floating aimlessly in space.

As the galactic expansion moved beyond the region, the UEE left the vicinity. The idea of using the system as a staging area was all but forgotten. It was reclassified again. This time as private industry and salvage rights were sold to the highest bidders. Cathcart had become a junkyard. And not a well monitored one at that.

Eventually, someone came up with a plan for what the government had discarded. An enterprising pirate named Whando recognized its potential. He set the precedent in motion, that would transform Cathcart into a pirate’s den. He recognized that the abandoned platform and ships could be used to house his cartel. By 2750, other pirates had come to the same conclusion.

Small clans, illegal cartels, and individual pirates retrofitted the various ship hulls into homes and bases of operation. Snaking them together by whatever means necessary. Goodbye Cathcart. Hello Spider, a straggling world-­sized mass of retired starships, half-built platforms, and abandoned colonizers. All held together with a prayer and plexi-metal.

Using Spider as a jumping off point, pirates raided the surrounding systems and occasionally, each other. Buyers looking to obtain illegal merchandise were drawn to the area, which in turn encouraged the establishment of permanent businesses. The UEE became aware of the system’s transformation but was unwilling to dedicate the money and resources to reverse it.

Spider is a living beast, continuously expanding. New wrecks and abandoned ships are joined to the maze daily. It’s a labyrinth on a grand scale. Taking a wrong turn could lead to a new find or your death. When you enter Spider, you are very literally taking your life in your hands. No insurance company will ensure a spacecraft that is knowingly going to Cathcart.

This den of thieves has one saving grace. If you’re accepted as a member of the pack, the wolves won’t strike. However, establishing those credentials can be tricky and unhealthy for your lifespan. If you insist on visiting, your best course of action is to dock at one of the locations that require password access. Entering through one of these “secured” locations will give you the air of being a member.

The current protocol for docking is to signal the tower four times for a vector approach. Any other number will immediately flag you as an outsider. You’ll also need to know the following docking location passwords.

It’s interesting to note that even pirates may harbor a fondness for historical references from earth. Dorris is likely a reference to Little Dorrit a novel by author Charles Dickens that is considered a classic look at society’s view of poverty and crime in Victorian England. And the classic American western film, High Noon that examines loyalty, in the face of seemingly insurmountable odds.

Even with these passwords, you are at great risk entering Spider. I don’t advise going alone. And always be on your guard at all times. A friendly smile can quickly turn into a knife in the back.