Skip to content
Anvil Aerospace was founded in 2772. To this day, it remains one of Terra’s success stories. The company’s focus has been on delivering military-grade equipment to the UEE navy.

Anvil Aerospace was founded in 2772. To this day, it remains one of Terra’s success stories. The company’s focus has been on delivering military-grade equipment to the UEE navy.

Initial projects were led by J. Harris Arnold, the company’s founder. Arnold was an eccentric old school designer who insisted on personally signing off on every detail and design. And while Anvil has grown to operating facilities on three dozen worlds within UEE space, it continues the tradition of CEO approval on all design changes.

Anvil’s entry into the civilian market is relatively new. While there had been internal debate over the company making this move, the UEE weighed in favorably on the idea. The government thought outfitting civilians with military-styled capabilities was a prudent cautionary measure for solidifying our general defenses. Equipped with Anvil ships, these pilots could be called upon as local militia, especially in distant frontiers.

Downsizing military-grade designs for civilian specifications was a complicated task. The UEE wanted civilians to be capable of being called upon as local militia without being capable of contesting government forces. Anvil rose to the challenge, delivering the Hornet series. The Hornet F7C was delivered to the market and contributed to a 34% increase profits.

Anvil’s success story continues. Their military contracts for Hornets and Gladiators necessitate several thousand be delivered to the UEE on a monthly basis.  The superiority and quality of the civilian Hornet series has made it a luxury brand that is only outsold by the RSI Aurora and Origin Jumpworks 300i series. It remains to be seen if the civilian version of the Gladiator will be met with the same success. 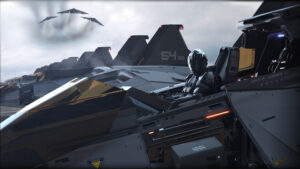