Skip to content
Although the player professions are what I'm most excited about in Star Citizen, I need a break from cargo hauling and mining. So it's back to where it all started when all we had in the Persistent Universe was ship combat.

Although the player professions are what I’m most excited about in Star Citizen, I need a break from cargo hauling and mining. So it’s back to where it all started when all we had in the Persistent Universe was ship combat. This time, the difference is that we have more mission variety, a reputation system, localized inventory, and the loss of gear when you die. One of my goals for doing PVE bounties is to initiate the mission from Miles Eckart that spawns an Idris. The Aegis Idris is a medium-sized capital ship capable of storing smaller fighters. The one featured as the final mission in the Eckart series is one that was stolen by the Arlington Gang, and the player is tasked with taking it out. I’ve seen videos of the event but I’ve never participated myself and would like to.

There are six levels of bounty missions in Star Citizen that determine the degree of difficulty. Very Low-Risk Targets (VLRT) with a single enemy and payout starting at 4K. At the upper range, we have Extreme-Risk Targets (ERT) which are intended to be done by a party of players. The entry-level payment for VLRTs is a 25K split among the participants. The number and class of the ships involved in the Bounty Hunting missions increase in difficulty as you progress through the six stages.

The other factor involved with Bounty Hunting is your reputation with the various factions. You increase your reputation by doing more missions for that particular faction. Word of caution. You have to monitor which factions you’re working with as there are alliances and rivals that impact your reputation gain. Doing missions for rival factions negatively affects your gain.

You can see your reputation using the Delphi icon in the mobiglass. To progress within each faction you’ll need to pay for and complete certifications before qualifying for each level. You can also see a faction’s allies and rivals. Obtaining missions from a faction require that you’re in the area of space where they operate. For example, to see Hurston Security and Miles Eckart missions, you need to be in the vicinity of Hurston or one of its moons. This is why you see different missions being offered as you navigate the Stanton star system.

Opinions vary about where to find the best missions with the most payout. Some players prefer doing the missions around MicroTech where you have to search for and destroy beacons while fending off waves of pirates. Others claim ArcCorp lets you earn better-paying missions faster. While I personally find that Hurston has the widest variety and largest number available at any given time. Either way, since I’m focusing on Miles Eckart, it means relocating myself temporarily to Everus Harbor, the orbital station above Hurston.

I’ve watched streamers do Zero to Hero streams where they can make it from VLRTs into MRT using a starter ship. You can for sure use a stock starter ship to complete VLRT and LRT missions. I started my reputation grind using the Sabre which is a stealth fighter that made quick work of combatants. The downside of using the Sabre was quantum travel across the system when I wanted to do a mission around MicroTech or was sent skipping back and forth between the moons of Hurston. It doesn’t possess a large amount of quantum fuel as a light fighter. To avoid refueling and allowing myself to do other things while in an area, I eventually swapped the Sabre for the Constellation Andromeda.

The Andromeda is overkill for the early bounties but was definitely more convenient. Larger ships = larger quantum drive = faster travel and more available fuel. If I wanted a break from doing bounty hunting the 96 SCU of cargo space is just enough to do a couple of quick runs of whatever is selling best at the moment. In this fashion, it was no time at all before I was making my way up the food chain for several Bounty Hunting factions.

To date, although we’ve reached the point where the Idris mission triggers, none of us have been able to get the mission to work due to the Idris not spawning. Regardless, it’s been fun doing the HRT and ERTs in a party of other players. You don’t make as much money grinding missions in a group but it’s a fun departure to mix in solo and party game-play.

The addition of localized inventory makes planning a gaming session a bit more strategic. Where are your ships and gear in relation to your character’s location? I had originally split my items between MicroTech and ArcCorp. Choosing to focus on reputation with Hurston Security and Miles Eckart meant setting up shop at Everus Harbor. After flying to Everus with some of the items I wanted to have locally aboard the Connie, I used the insurance reclaim system to move my loaner Connie, Sabre, and Herald to the station.

While my ships were being claimed which would cause them to be available from my new location, I visited the station’s hospital to set my spawn point. This is an important thing to do that will save you time if you happen to die. Using the Regeneration console at a local hospital makes that facility your spawn point. And while you can only ever have one active, you can change them as often as you like.

As far as gear is concerned, you don’t need to wear anything special for space combat beyond a flight suit and helmet. And that’s only needed to make it from the landing pad and into your ship. In fact, if you have an inkling that you might die during ship combat you’re better off wearing the default flight suit and helmet. Armor doesn’t contribute to spaceflight, so there’s no point in losing your gear. I have a few sets of roleplaying items that I like to wear but at roughly 5K to 7K for an outfit, I don’t want to lose them left, right and center.

If you do happen to die, the game will show the location of your corpse, allowing you to return and retrieve your stuff. If you’re incapacitated but not dead, you can be recovered on the spot or taken to a hospital. This avoids a full death and the trouble of retrieving items.

The combined mechanics of choosing the right ship for an encounter, deciding on which reputation to level, and the tactical decisions about your base of operations keep bounty engaging, and it’s a good way to earn money in the game if you enjoy combat. 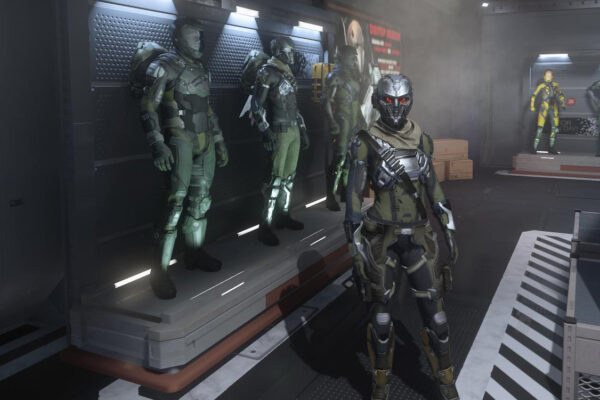 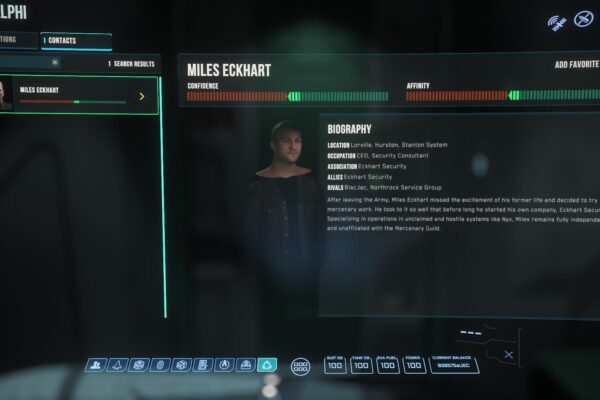 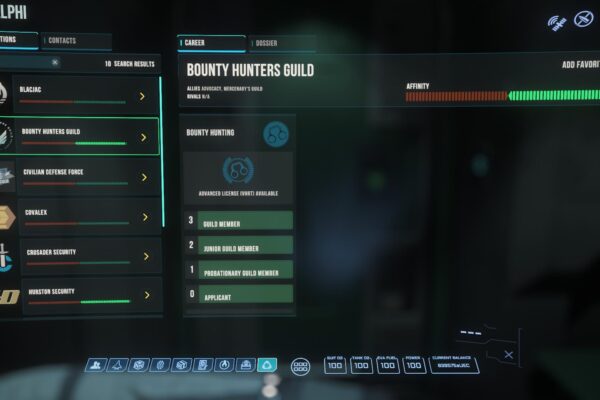